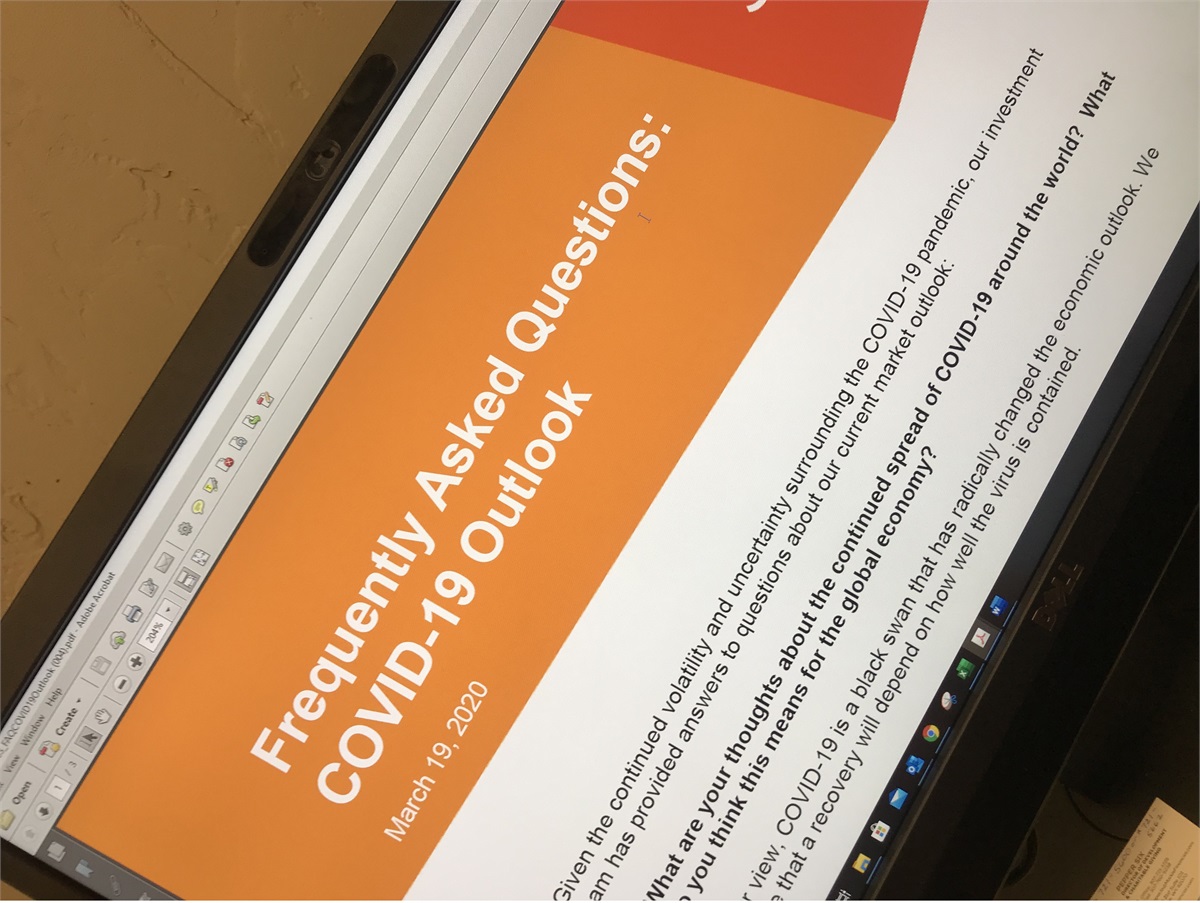 Given the continued volatility and uncertainty surrounding the COVID-19 pandemic, our investment team has provided answers to questions about our current market outlook:

Q. What are your thoughts about the continued spread of COVID-19 around the world? What do you think this means for the global economy?
A. In our view, COVID-19 is a black swan that has radically changed the economic outlook. We believe that a recovery will depend on how well the virus is contained.
China (where COVID-19 originated) is expected to stabilize and improve: The country’s draconian measures to curb the outbreak (after a slow initial response) proved highly successful; it has reported relatively few new cases since the end of February (according to data as of March 14, 2020, from Johns Hopkins University). South Korea has also successfully managed to reduce its rate of reported cases.

By contrast, the virus continues to spread rapidly throughout Europe (especially in Italy) and is just taking hold in the U.S. We believe the EU needs to be far more aggressive in its efforts to curb the spread than it has been. As for the U.S., we expect the government to make fairly dramatic measures in an effort to ensure that its trajectory of new cases is closer to that of South Korea than Italy.
When we see an inflection point in the number of cases globally, it should be a catalyst for a sustainable rally and normalization of markets. We will be following the global curve on a day-to-day basis as the cases in Europe and the U.S. continue to accelerate.
There’s reason for some confidence that we will get through this period of sharp market declines. It depends on the trajectory of the virus, the robustness of the government response, and extent of economic shock. But we take comfort that markets recovered in 2008 after oversold levels. An intra-year downturn, while certainly painful, is part and parcel of investing in the stock market. We believe that a lot of the decline has already taken place and that a recovery can take hold.

Q. What has been the damage to the world economy so far?
A. This answer changes on a daily basis. Data from the week ending March 13, 2020, are already out of date. The only thing we can say with certainty is that U.S., world and emerging markets have all entered bear-market territory. The question is where we are headed next.
The world economy was improving just before this all started, as illustrated by the Organisation for Economic Co-operation and Development’s leading economic indicators (which are designed to anticipate turning points in economic activity): As of February 10, 2020, over 50% of the countries showed month-over-month increases. While the global economy was on an improving growth track for 2020, the numbers for March will likely show a dramatic turn lower. We anticipate all countries will be impacted.
China was hit hard in February, with a sharp drop in its manufacturing purchasing managers’ index. Year-over-year, the country’s retail sales plunged by more than 20% and industrial production contracted by more than 13%. We are getting word that the country is ramping production back up, and hope to see a sharp recovery going into April.

In the U.S., several industries are already feeling the effects of COVID-19, including general merchandise, air transportation, commuter transportation, broadcasting and accommodations. Each of these areas represents about 10% of total U.S. growth output (as of October 2019, according to the U.S. Bureau of Economic Analysis); if they endure a 30% drop that lasts two or more months, U.S. gross domestic product would slip to near-zero levels in first quarter and contract in the second quarter. (Hopefully a rebound would soon follow.)

Q. What is the U.S. Federal Reserve doing to fight the unfolding economic crisis?
A. One big plus for investors is that central banks are in crisis-fighting mode. They are not holding back or taking half-measures. The U.S. Federal Reserve (Fed) cut rates by 1% (to 0% to 0.25%) on Sunday, March 15, without waiting for its scheduled meeting just three days later on Wednesday, March 18. The Fed also announced a steep scaling-up of quantitative easing, with $700 billion worth of asset purchases (Treasurys and mortgage-backed securities). And, as in 2008, the central bank plans to launch a commercial paper-funding facility to provide loans to American corporations. We think this should be helpful. The Fed also extended swap lines with other countries to ensure U.S. dollar liquidity around the world.

Q. How have earnings and price-to-earnings ratios changed since COVID-19 arrived? How do you think this will impact equities?
A. We expect a sharp decline in earnings for coming quarters. Analysts have little guidance as companies don’t know what to expect.
One thing is clear when looking at prior earnings and price-to-earnings (P/E) ratios: Stocks typically struggle when earnings decline or flatten. Bear markets historically occur when earnings multiples and P/E multiples both decline. We’ve already seen a sharp decline in earnings multiples. The question is how bad it will get.

Q. What specifically will you be watching for globally in the coming weeks?
A. We will be watching weekly economic data closely. We have yet to see a jump in U.S. initial jobless claims. As for oil prices, the recent rapid decline should hurt producers everywhere, including in the U.S. (Texas), yet provide relief to energy consumers. That being said, we do not believe the oil-price war between Saudi Arabia and Russia is sustainable; Saudi Arabia can’t likely exist on such low prices ($20 per barrel as of March 18, 2020).
Longer-term, we expect to see further central-bank action and breathtaking fiscal policy in the U.S. and elsewhere. U.S. President Donald Trump’s administration is floating an $850 billion relief package, which could add one trillion dollars to the already significant national debt. We anticipate Europe will take similar measures; the German government has also signaled that it is ready to spend money for fiscal support.

Q. Have any significant changes been made to SEI’s Funds in response to these events?
A. We have made no fundamental changes to our Funds. As always, we believe it’s important to maintain discipline. Trading has been modest. Some managers who were already reducing exposure to China are now doing so at an accelerated pace. And some managers are rotating into names they have had their eyes on due to lower valuations.

Glossary
Price-to-earnings ratio is equal to market capitalization divided by after-tax earnings. The higher the P/E ratio, the more the market is willing to pay for each dollar of annual earnings.
Quantitative easing refers to expansionary efforts by central banks to help increase the supply of money in the economy.
Swap line is a temporary currency agreement between central banks to each keep a supply of their local currency so they can trade with each other (for overnight and short-term lending only) at the going exchange rate.

Important Information
This material represents an assessment of the market environment at a specific point in time and is not intended to be a forecast of future events, or a guarantee of future results. This information should not be relied upon by the reader as research or investment advice and is intended for educational purposes only.
For those SEI Funds which employ the ‘manager of managers’ structure, SEI Investments Management Corporation (SIMC) has ultimate responsibility for the investment performance of the Funds due to its responsibility to oversee the sub-advisers and recommend their hiring, termination and replacement.
SIMC is the adviser to the SEI funds, which are distributed by SEI Investments Distribution Co (SIDCO). SIMC and SIDCO are wholly owned subsidiaries of SEI Investments Company (SEI).
To determine if the Funds are an appropriate investment for you, carefully consider the investment objectives, risk factors and charges and expenses before investing. This and other information can be found in the Funds’ summary and full prospectuses, which may be obtained by calling 1-800-DIAL-SEI. Read it carefully before investing.